An abysmal combination of words and grammar.

This book is a classic example of how a story can be layered unnecessarily and packaged to the unassuming readers as a “book”. Poor writing, pathetic editing and copious amount of cringe-worthy content find their places in this book.

This book is basically about an enchantress who is assigned the task of getting five powerful snake kings laid and stealing their power weapon from them. The resultant war between the three worlds of the Devas, Asuras and the Nagas (serpents) and who wins and who dies at the end, form the remaining part of the story.

The story begins only after a good 90 pages. Till then, its all about sex, written in a very poor way. Post that, bad editing makes up for the absence of sex in the story. By the end, I cursed myself for picking this up to read.

Erotica is different and writing crass content is different. For quite some time, all I was seeing was page after page of a sex scene, THE SAME SEX SCENE, explained in bad language.

Although the book showed a tiny ray of promise somewhere in the later half, it vanished as quickly as it had appeared.

All I could think about, after reading the book was that THE EDITORS HAD ONE JOB TO DO! Misplaced prepositions, different spellings for the same word on the same page, ridiculous usage of words, some non-existent, some out of context and some bad-sounding.

Here are some examples of what I would call the total absence of ‘editing’ (Click on each image to find what is wrong with them). I swear these are just the tip of the proverbial iceberg.

This sentence sounds bad. Editing is equally about how the sentence reads and sounds when read 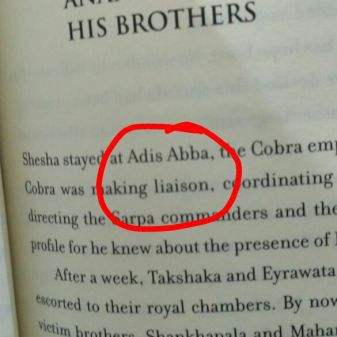 This is supposed to be Adis Ababa 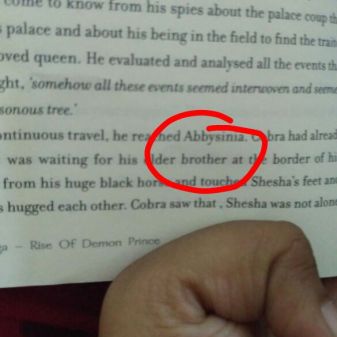 The words ‘as’ and ‘therefore’ comes in the same sentence

Although, this is a softer aspect than the above, a better word could have been used in its place

This book does sheer injustice to the cover page and also to the reader’s expectations.

Story Mirror should seriously do a quality check within the organisation to stop this massacre on the English language. Their editors must undergo training in ‘editing’ before calling themselves one.

Would I be re-reading this? Heck No!
Would I recommend this? Not even to my worst enemy.